It’s been almost a week since I got my hands on Google’s flagship phone, the LG Nexus 5, running the latest Android software: Android 4.4 KitKat. I’ve had a good play around with the phone and have discovered a number of issues that need to be addressed in the next software revision.

Using Headphones and Changing the Volume

If you have your headphones plugged in and change the volume using the hardware Volume buttons, the beeping comes out of the speaker and the the headphones (it should only come out of the headphones). An annoying issue when you’re trying to be quiet! Its a odd issue as the button tabs and other sounds come out exclusively through the headphones, so why not the volume sounds?

The GPS lock times on the Nexus 5 are very slow. From a cold start (i.e. no cached satellite information), the phone can take anywhere between 15-25 seconds to get a lock (sometimes even longer depending on the area). Compared to my previous phone (the Samsung S4), the times are really slow. The S4 managed to lock on to GPS within 3-6 seconds.

Overnight, I experienced major drain on the Nexus 5, draining the battery in 9 hours while being completely idle. It’s a bug that’s affected other mobile phones in the past, relating to Wi-Fi and the wlan_rx_wake process. Something is using the Wi-Fi network causing the battery to drain quickly. Closing all apps before going to sleep seems to address the issue. 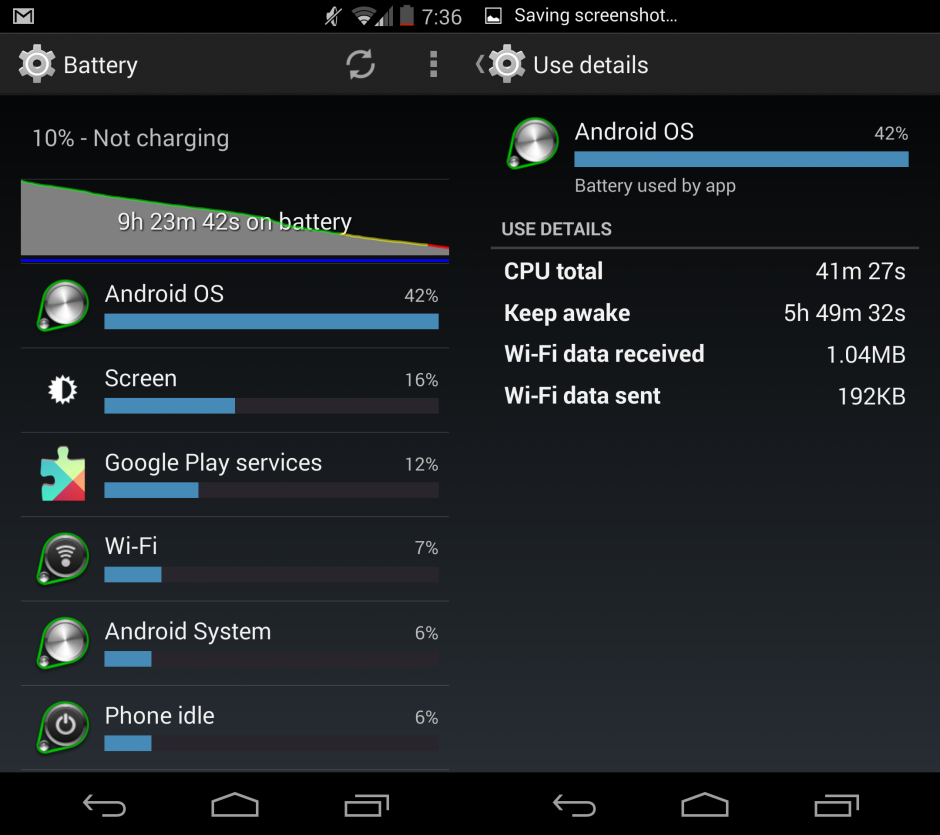 Update: Turns out that you also have to turn off the “Scanning always available” setting in Settings > Wi-Fi > Advanced Wi-Fi for it to actually stop using Wi-Fi. Thank you to +Nicolas Finn for pointing it out. 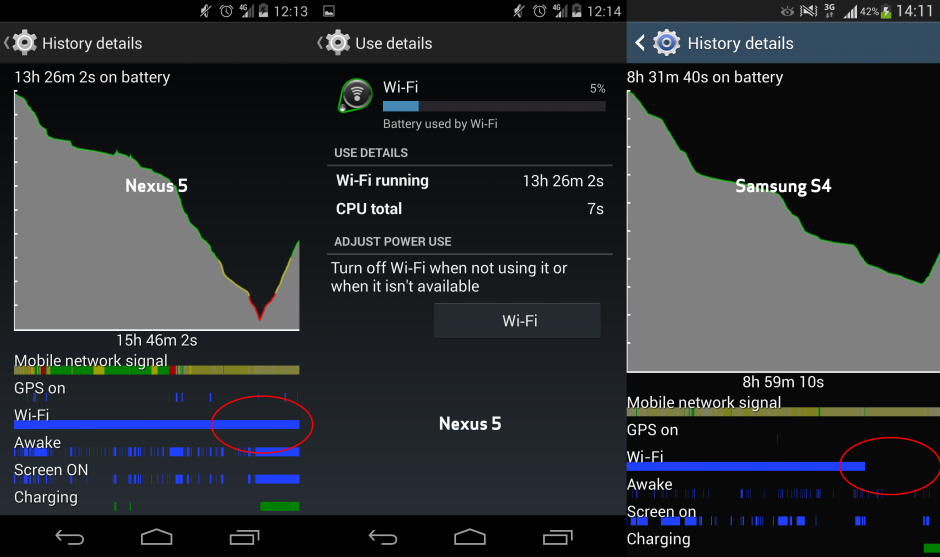 “OK Google” in Other Languages

So not technically a bug, but it would be good if the Nexus 5 allows you to use the voice activated search in other languages. At the moment, its limited to devices using “English (US)” as their Voice language. I don’t see why this can’t work in “English (UK)”, since you would have to say exactly the same thing.

The status and navigation bars in Android 4.4 KitKat have gradient transparency, blending in with the background. However, on some occasions, it doesn’t fully blend in, leaving a somewhat darker transparent background. Not a major issue but would be good to see it fixed. The transparency can be fixed by opening and closing the notification tray.

According to +Sebastian Carewe, this bug happens when you turn off the screen while having the notifications draw expanded. It’s the best way to replicate the issue on your device.

If you are using basic security on your phone, like “Slide” to unlock the screen, receiving a miss call will unlock your phone until the auto-lock timer kicks in. This means if you miss a call, you could end up pocket dialing or opening apps while the phone is in your pocket. Using PIN, Pattern or stronger security will prevent this from happening.

Google has confirmed that there is a bug with the Nexus 5 that affects sound quality. It’s a software issue and not a hardware issue, luckily, and Google are working on a fix. See the article on Android Central for more information.

Back Button on Google Now

Even accessing Google Now from the Home Screen and pressing the Back button doesn’t take you back to the Home screen.

As reported by +Matt Davis, the Wi-Fi on the Nexus 5 sometimes stops working, even though it appears as connected. The Nexus 5 fails to communicate via the connected access point, while other devices continue to function as normally. To resolve this issue, a static IP address needs to be set for each Wi-Fi network you want to connect to.

Similar issues have been reported to Google, including problems connecting to Wi-Fi when LTE / 4G is active and the Wi-Fi driver crashing when trying to connect to new Wi-Fi networks. Other possible solutions include switching off the Wi-Fi radio and enabling it, or switching to Airplane mode temporarily.

Although not related to the Nexus 5 and Android 4.4 KitKat, it’s the first phone to replace the Messaging application with the new Hangouts application for SMS.

The below video demonstrates the unresponsiveness of the application when trying to open a conversation with my wife containing 5000+ messages. The video was recorded in real-time to demonstrate the delay in opening and typing messages.

Update: Version 2.0.128  (914007-30) of Hangouts is a bug improvement to the stock version of Hangouts on the Nexus 5. The new update has fixed the responsiveness issues, no longer causing the app to force close when viewing large conversations.

There is a bug with the Nexus 5 / Android 4.4 KitKat where sharing a Link / App etc results in the same app opening every time. For example, sharing a link from Chrome always opens Google Keep. Several users have reported this issue with various applications.

A possible fix is to reset your application preferences. Go to [Settings] > [Apps] and click on the … (Menu) button. Then click on “Reset app preferences” to clear all the default options. This should get the Sharing dialog working again.

The Camera App on the Nexus 5 / Android 4.4 KitKat has a issue with multiple applications trying to access the camera. For example, opening Google Goggles to take a photo, then opening another application (e.g. Barcode Scanner) results in an error. The camera cannot be used in the second application until you close the first one – this can be done by closing the application from the Recent Apps menu.

You’ll see an error similar to the below: 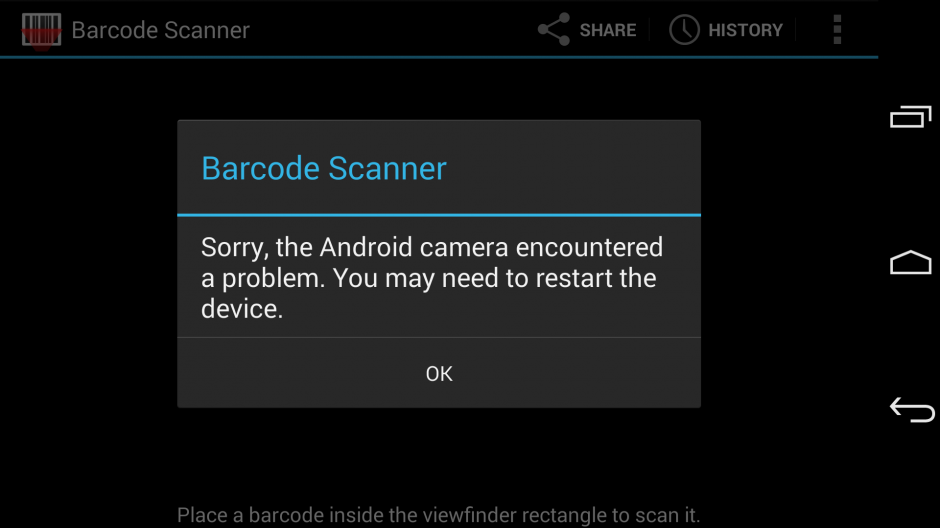 The videos on this page were recorded using the Android Debug Bridge (ADB). For instructions, please read this tutorial.

Come across any bugs yourself? Please let me know in the comments section below and I’ll include it.