The Lewis Moody Teamtalk Facebook Application was created to promote the 2010 Investec Internationals. The application allows the user to select up to three friends to appear in an interactive video featuring the England captain, Lewis Moody, talking to the friends the user selected. 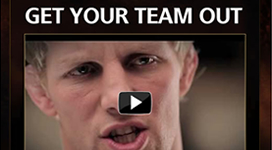 The application used a flash animation will the friends’ and user’s name passed in as flash variables using a PHP form. The application was created in PHP with a MySQL backend. As the client was expecting huge traffic to the website, the application made use of memcache caching to reduce I/O access involved in accessing the database.

The application was hosted on Amazon AWS, making use of a dedicated database server and up to four web server instances, under a load balancer to distribute the traffic to the website. Each of the web servers had a separate memcache instance running too.

The Amazon servers (or AIMs – Amazon Instance Machines) were load tested using JMeter and a simple script to measure the average page load times under different amounts of traffic. The servers were tested by simulating between 250 to 2,000 concurrent users accessing the application and database.

As the client wanted to manage re-deployment of the application, I created a simple shell script to backup the current deployment and then export the latest code from a SVN repository in to the web root folder.