For the 2010 General Election, I developed two applications that was used to promote voting and get Facebook users interested in the debates held by the three main candidates. The two application were hosted on the Democracy UK fan page. The first application was a voting registration form for the Electoral Commission to get unregistered votes signed up in time for the elections on May 6th 2010. I build a simple application that allows users to register for voting directly within Facebook. The application app was a big part of the campaign and was featured in newspapers and even on BBC Breakfast. 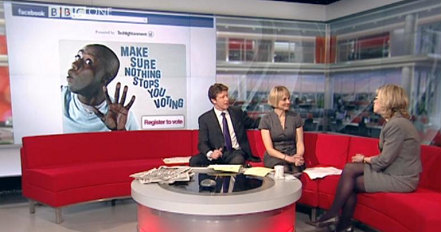 The second application was a “Dial Test” for the election debates. I created an application that would be used in real time by Facebook users during the debate to voice their feedback. As the debates aired live on TV, users would be able to express positive or negative feedback, which was plotted on a graph in real time, showing the general sentiment of the debate, and the current issue being discussed. Users were also able to add their comment to the comment Wall for other users to read.

For this application, we teamed up with Facebook to make the 2010 election the first ever social media election. Facebook’s Director of European Public Policy, Richard Allan, said the following:

“The first prime ministerial debates are a landmark moment in British politics, but the rigid rules mean that the voters themselves have a limited role. The mass dial test changes that completely. The Facebook dial test enables millions of voters to say exactly what they think of the three leaders’ performances and to wrest back control from politicians.

2010 is the UK’s first ever social media election, and the dial test shows how voters can get involved on a scale never seen before. The dial test will provide a true barometer of the public mood and will define how the impact of the debates is interpreted.”

The application was hosted for the three live debates, during which time the application attracted 17,900 users, of which 11,600 users were active in all three debates.

On the day of the first debate (April 15th 2010), the application received a overwhelming number of users which inevitably took the server offline. For the second and third debates, we moved the servers from a dedicated server to Amazon’s Hosting Cloud  (EC2) so we could scale the application as needed.

The application was targeted to Facebook’s 23 million UK users so I took extra precautions the second time around. To prepare for the second debate we setup 20 Amazon servers to handle as much load as possible. I used jMeter to load test the servers to make sure we could handle as many possible concurrent users as possible.

The Dial Test application in the press: