The Samsung CYFR Application was created to promote the new Samsung Genio Touch mobile phone – a budget touch screen mobile phone, available in a selection of colours. The application focused on the mobile phone’s slogan of ‘What colour is your life?’, allowing users to send colourful messages to their friends.

The application was build using PHP and MySQL, allowing users to encode plain-text messages as colour encoded blocks. The colour coded message used image manipulation using PHP and the GD2 library to create each colour block on a large image canvas. The image was then sent to users and published to the user’s newsfeed for friends to see.

The application also included a inbox, allowing users to receive personal messages encoded in the same way. The colour coding algorithm converted each letter and number into a unique (non-sequential) colour block. This application was the first app I created that used this kind of image manipulation. A lot of consideration was taken to make sure blocks would automatically wrap to a new line, and the image was then sliced into 5 blocks to publish to the news feed (this was a facebook restriction for images on the newsfeed). 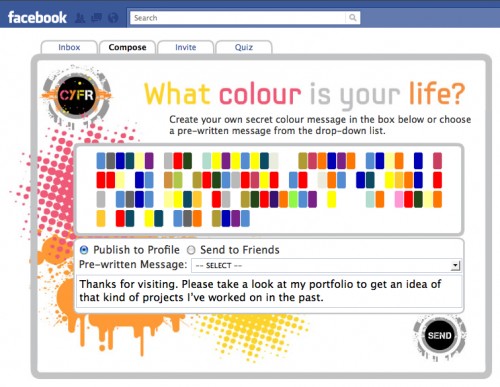 The application gained over 7,000 users, with little media spend, thanks to the virality of the application. One of the main reasons for the app succeeding was because it made user’s Facebook Wall colourful and vibrant. Facebook later changed the Newsfeed policy (due to abuse of this feature), stopping application from posting multiple images to the Wall.