The F400Share application was a cross-platform application developed for Facebook and Bebo, to promote the new Samsung F400 mobile phone. The aim of the campaign was to get users to upload a audio clip of themselves singing a song, for a chance to be features in Samsung’s nation-wide advertising campaign.

The application was launched in Jone 2008 and allowed users to listen to the uploaded tracks and vote for their favourite ones. Four winners were chosen at the end of the campaign. The application used a flash based music player. I did the PHP/MySQL coding to handle file upload and recording of statistics. The top tracks received over 10,00 votes each.

After the campaign, the applications on both Facebook and Bebo were taken offline. 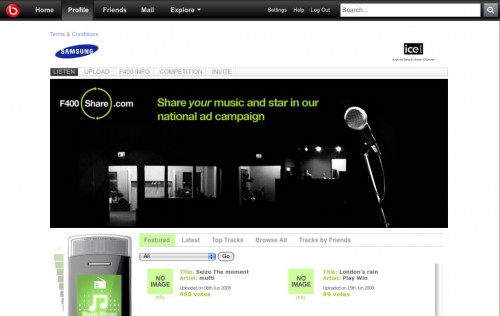